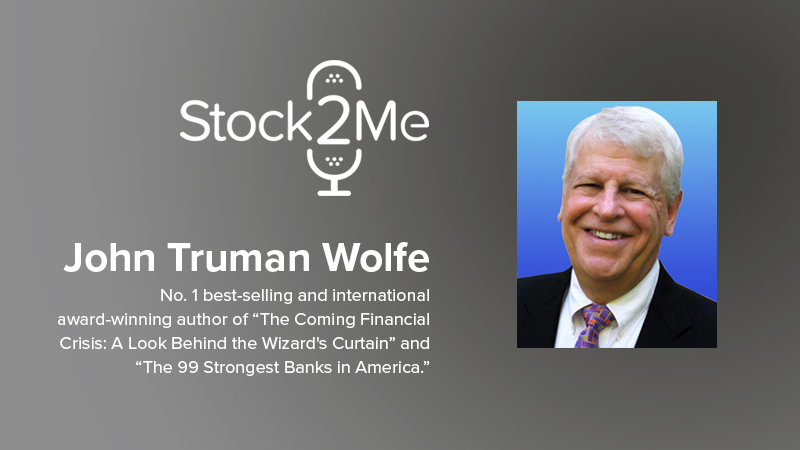 InvestorBrandNetwork (“IBN”), a multifaceted communications organization engaged in connecting public companies to the investment community, is pleased to announce the release of the latest episode of The Stock2Me Podcast as part of its sustained effort to provide specialized content distribution via widespread syndication channels.

The Stock2Me Podcast features a fascinating array of companies and individuals, many of whom are actively revolutionizing age-old business practices within their respective markets. Stock2Me’s latest podcast features John Truman Wolfe, No. 1 best-selling and international award-winning author of “The Coming Financial Crisis: A Look Behind the Wizard’s Curtain” and “The 99 Strongest Banks in America”. Wolfe is also the editor and publisher of “Strategic Financial Intelligence”, a monthly newsletter dealing with investing, politics and the economy.

Wolfe kicked off the podcast by examining the continued rise in mainstream appeal of decentralized cryptocurrencies following the launch of bitcoin in January 2009.

“(Digital currency) is at the doorstep of mainstream, very much so, particularly the last 18 months. A very profound announcement taking it mainstream was that PayPal agreed to accept it as payment and settlement for its 430-some-odd million users and its 20 million vendors. That’s Bitcoin, and when PayPal opens the door for it in that way, it really steps into the mainstream,” he said in the interview. “Today there are some 7,000 cryptocurrencies. … The cryptocurrency market today is around $335 billion. So, mainstream, yes.”

Wolfe then turned his attention toward the efforts of central banks around the world to implement centralized digital currencies of their own.

Wolfe concluded the interview by providing some insight into the potential impact of recent stimulus initiatives on the economy in the coming months and years.

“Regardless of who wins the election, the Fed has put an additional $3 trillion-plus into the economy. That’s a lot of money. With that amount of money and the GDP where it is, which is not good, we’ll have inflation,” he noted. “Inflation is basically defined as the amount of money in circulation relative to the goods and services. We have, in the U.S., a dramatic increase in money and a slight decline in products and services. One thing I expect after the election and into 2021 will be inflation.”

To hear the whole episode and subscribe for future episodes, visit: https://podcast.stock2me.com

The latest installment of The Stock2Me Podcast continues to reinforce InvestorBrandNetwork’s commitment to the expansion of its robust network of brands, client partners, followers and the growing IBN Podcast Series. For more than 15 years, IBN has leveraged this commitment to provide unparalleled distribution and corporate messaging solutions to 500+ public and private companies.

To learn more about IBN’s achievements and milestones via a visual timeline, visit: https://IBN.fm/TimeLine